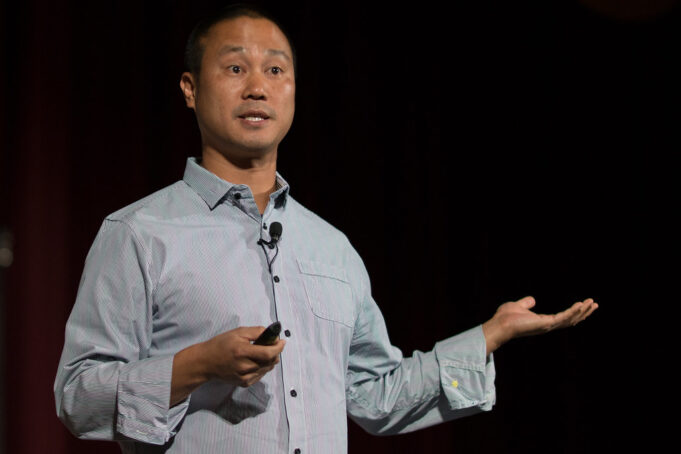 I had the pleasure of interviewing via email Tony Hsieh, the CEO of online shoe retailer Zappos.com, for an article I wrote for the August issue of Multichannel Merchant. Zappos is a real innovator among online retailers in a lot of areas, not the least of which is social media. They have taken Twitter by storm, with 440 twittering employees – including their CEO (Tony) and their COO (Alfred). They even launched a microsite dedicated to their Twitter presence.

I thought it would be interesting to share the interview with you here. The final article is now online, so be sure to check that out too.

Stephan: Can you share a bit of background about you and Zappos, and how the company culture plays into your inclination to jump headfirst into new online marketing channels? What were your objectives in entering the Twitterverse? twitter.zappos.com from a social media standpoint is pretty impressive and in the corporate world a rather unheard of large-scale embracing of Twitter. What is the big picture idea behind this / how did this come about?

Tony: Background on the company is here. My bio is here. You can get a glimpse inside our company culture here.

For Twitter, we don’t really view it as a marketing channel so much as a way to connect on a more personal level, whether it’s with our employees or our existing customers.

Initially, we started getting the entire company more involved with Twitter because we saw it as a great way to help build our company culture. But then we discovered it was also a great way to connect with
customers as well.

Stephan: Are you viewing this as an experiment to be evaluated over some trial period or are you committed to engaging with customers via Twitter over the long term?

Tony: We are committed to connecting with our customers on a personal level. The telephone is actually a really great way to do this, which is why we have our 1-800 number at the top of every page of our website. We found that Twitter is another great way to do this, and if something else comes along in the future, then we would definitely explore that as well.

Stephan: How are Zappos employees using Twitter? Is there any competitive aspect amongst employees about follower acquisition? Is there an overarching theme to their tweets or are they just twittering about their cats? Do they twitter about Zappos products and blog posts? What’s their level of supervision of them in their twittering? e.g. any employee guidelines for twittering? and are they trained? How do they know not to pose as a random consumer and post-pro-Zappos tweets while hiding their corporate employee status? What would an employee have to tweet to get fired? What’s the procedure for employees handling tweets directed directly at them from customers?

Tony: We do offer Twitter classes, but those are optional and are more for employees to learn how to sign up for Twitter and use various features and third-party applications. We really don’t give any specific guidelines except to tell them to use their best judgment.

It’s up to employees what they want to Twitter about. As I mentioned earlier, the primary focus was to get employees to connect with each other, so the vast majority of the posts are about their personal lives.

In terms of what an employee would have to tweet in order to get fired, it would be if they did something that was not consistent with our core values, which are here.

But this is not Twitter-specific: If an employee does anything that’s not consistent with our core values, whether through Twitter, telephone or in-person, then we need to consider whether that employee is Zappos material for the long term.

We currently don’t have any standard procedures for responding to tweets from customers.

Stephan: What (if any) kind of ROI are you seeing by having your employees spend time being active on Twitter? What are your success metrics?

Tony: We’re not really looking at short-term ROI in terms of sales. We’re looking to form life-long relationships with our customers, and we think Twitter helps us do this.

However, we’ve also found that Twitter has been great for recruiting because people can get a glimpse into what our culture is like just by observing how we interact with each other on Twitter.

Stephan: What’s the response from customers been? What was the response to your tweet asking for feedback on the idea of a zappos.org site that donates a percentage of the revenue to charity? Have you heard if any of your mentions of companies/products/restaurants resulted in an increase in sales for what you’ve endorsed?

Tony: The customers that are following @zappos on Twitter seem to really enjoy it because it allows them to interact with us on a much more personal level. I’ve heard anecdotally of people buying from us because of our Twitter presence, but as I mentioned earlier, we’re not really looking at the short-term ROI.

Stephan: Has Zappos embraced or has plans to embrace any other social networks on such a large scale? Digg? Propeller? Etc?

Tony: Not at this time.

Stephan: Could you describe some of the contests you’ve been conducting over Twitter and how successful you feel they’ve been? Any big plans for upcoming Twitter contests?

Tony: We don’t have a formal contest plan or program.

Stephan: Have you considered Twitter as a customer service tool to crowd-source customer questions and set up an employee guru status where employees get points for answering customers’ questions effectively?

Tony: Not at this time.

Stephan: You seem very open in sharing what you’re doing and where you’re going at any given moment. Do you feel too exposed sometimes by being so open? Do you fear making some statements on Twitter that might come back to haunt you in some way?

Tony: Almost any statement that’s taken out of context can be interpreted negatively. But part of the beauty of Twitter is that you can see what we have all been doing overtime and make your own judgment on what you think of Zappos based on the sum total of everything, not a single tweet.

Stephan: Do you randomly twitter stuff, or do you try to schedule entries consistently?

Tony: I think it’s important to be authentic, so I don’t have a schedule. I’ll tweet if I feel like it, and I won’t if I don’t.

Stephan: What would be your advice to other CEOs out there who would like to try twittering?

Tony: Just be real and use it as a way to connect more deeply with people. Don’t think of it as a marketing tool you have to leverage. And you actually have to be passionate about twittering or it’s not going to work. So if you’re not passionate about it, then don’t do it.

6 Actionable Blockchain Development Tips That Work Like a Charm

Activities That Helped People Through the Pandemic

No Time to Advertise With Google Adwords? Leave it to Cheap Adwords Services